Why are Poppies a token of Remembrance? Can I order Poppies with florists near me? 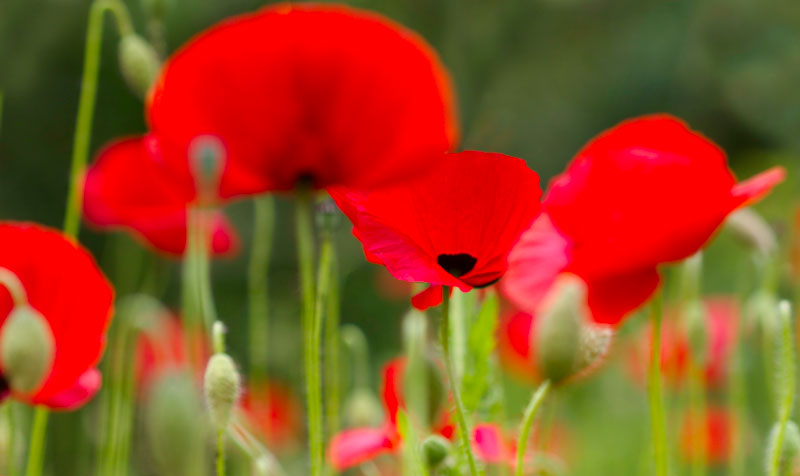 Poppy is one of the oldest cultivated plants. Although the Poppy plant is divided into approximately 110-120 species, around 600 species of the poppy family (Papaveraceae) exist worldwide.

They come in numerous variations and colours, with the wild poppy being the most commonly found. Another well-known species is the opium poppy, a cultivated form of poppy seed made from many wild poppy varieties.

The poppy plant was first named in 1752 by Swedish botanist Carl von Linné, but goes back over 5,000 years ago. The generic name is the Latin word "pappare," which means "to eat."

For the Romans, a wheat flour porridge refined with poppy seeds was a favourite dish and was mostly prepared for children. In addition to the Romans, the Greeks also consumed roasted poppy spread on bread or honey.

Nowadays, for the British, the poppy plant is mostly synonymous with Remembrance Day, which falls on Sunday, November 11th. On this day around 100 years ago, the German Empire surrendered in the First World War. Since then, November 11th has been a national day of remembrance. This is why many people wearing the small, red poppy flower to remember the fallen.

Poppies have a variety of appearances, which depend primarily on the species. Despite the types, all poppy species have a few things in common. This includes four large petals, an eye-catching fruit capsule, and a toxic milky sap in the green parts. What's more, the poppy's fruits can contain up to 30,000 seeds, ranging from a cream colour to blue-grey or black.

The colours of the poppy flowers also vary. They are usually deep red, orange-red, purple, or even pink and white, depending on the variety. The flowers, which appear from mid/late May to early July (depending on the type), have a calyx (the sepals of the flower) and a crown.

Additionally, the plant's upright stems are often hairy, seldom glabrous (devoid of hair), and can be leafy or not. More so, the leaves are alternate, sometimes stalked, sometimes sessile (directly attached by the base without a stalk).

Most poppy plants prefer sunny and warm locations that offer well-drained, nutrient-rich, and moderately dry soil. Despite this preference, poppy seeds are straightforward to care for in general and can water them regularly during the dryer seasons.

However, beware of too much watering. Excessively wet soil can trigger fungal diseases in the seeds such as downy mildew or poppy blight. You should also remove any withered parts of the plant, which prevents some species from self-sowing.

As for the season, you can directly sow poppies in March and April and then thin them out to a distance of 20 to 30 centimetres (depending on the variety). With autumn crops, flowering occurs earlier. You can enrich the soil with a little compost beforehand and keep the seeds evenly moist after sowing.

When it comes to fertilizers, they are unnecessary, although the Turkish poppy varieties are happy to be given compost before flowering.

Looking to send flowers with Poppy? Check out our full flower range to see if they're available