What are the symbolic meanings of Freesia? Can I order Freesia with local florists near me? 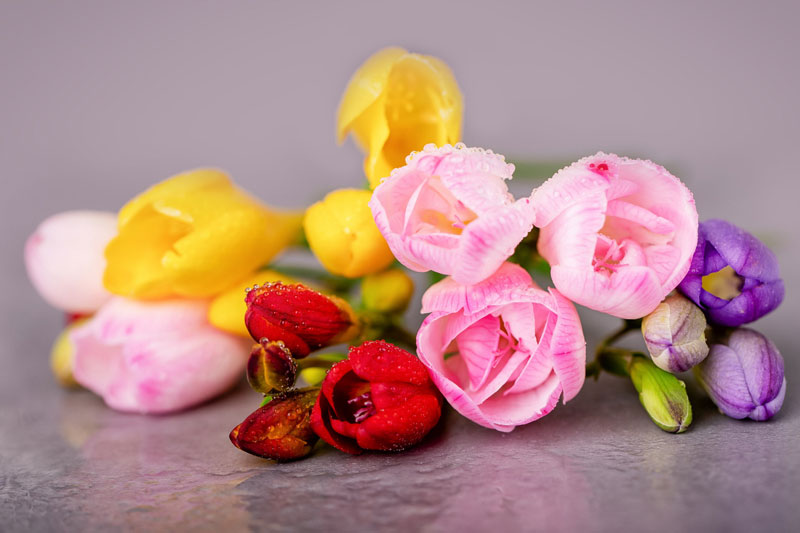 The genus freesia contains about 14 different species. Some of the most liked freesias include the algarve, oberon and the honeymoon.

The freesia got its name from Christian P. Ekland, in commemoration of his friendship with another botanist. Freesias are a symbol of innocence and trust - but there are also specific colours that have different meanings.

In the language of flowers, the freesia has long been seen as the best way to symbolise trust. They are also used in the USA to commemorate couples’ 70th wedding anniversaries. In numerology, freesias symbolise obligation and selflessness.

Freesias are herbaceous plants. They grow branch stems about 40 cm tall, bearing just a few leaves, with a one-sided array of flowers with six tepals.

The stems of freesias have a very unique trait. They will turn right at an angle just under the bottom flower; this makes the upper area of the stem grow in parallel with the ground.

Their flowers bloom facing upwards. Because of this, freesias are wonderful to look straight into from above and make for great flower arrangements.

Each of the stems will sprout 6 to 12 blossoms. These trumpet shaped flowers can be in single or double formation and come in many beautiful colours. Some of these colours include cream, white, red, orange, yellow, lavender, and pink. Their gently sweet fragrance will fill the room.

Freesia is a perennial plant, and will bloom year after year. Despite this, a lot of freesias are grown annually. All of their species can be found in Africa, with the majority of them native to Cape province and the rest of them in tropical Africa. One species can also be found north of the equator.

They begin to grow naturally in late fall, as soon as the weather begins to cool down and the rain begins. The bulbs will sprout in autumn and create foliage during the winter. They will then bloom from the length of winter up to early spring.

Freesias can be found naturally in stony or sandy soil. They are often located in dune scrum or at the edge of forests and thrive in light shade. Freesias have been naturalised in mild climates - you’ll see them in many countries with suitable weather.

To grow your own freesias, you should plant them in well-drained soil, with a depth of about 5 cm and a similar space apart, in light shade. Adding organic matter to the soil can improve the quality of their growth. In the garden, plant them in autumn and they will flower around April and July.

When putting them in containers, plant no more than six bulbs, with a similar depth and equivalent space. They enjoy rich compost; if you can add extra grit to the soil this will help with drainage. Water them regularly and make sure they are shaded and moist at all times.

Looking to send flowers with Freesia? Check out our full flower range to see if they're currently available to order.

Direct2florist - a great way to find local florists you can order fresh fressia online with.