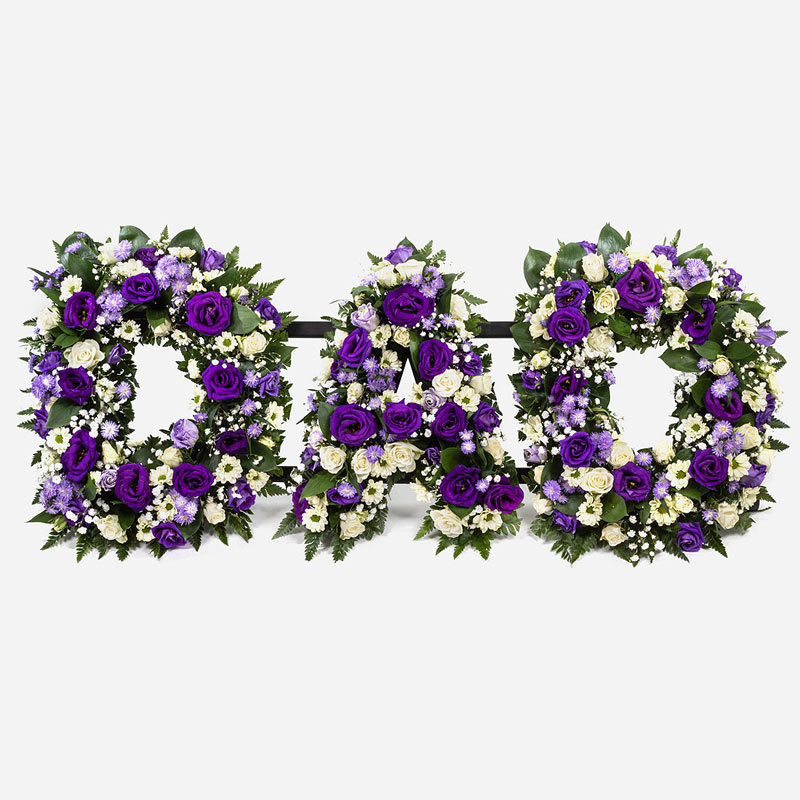 A funeral tribute in letters

A name, a nickname, a word to sum up the relationship between the deceased and you. Letters are a popular choice for funerals especially from close family members who want to make a personal statement.For example funeral flowers saying GRANDAD, or letters to spell POPS. A funeral flower letter tribute would usually be the main floral tribute at the funeral and placed on show through the window of the hearse or carriage for the cortege, as the focal floral tribute, like a funeral cross or a heart tribute. When the letter tribute is from a close family group, the arrangement may also be placed with the coffin in the church or funeral venue for all to see. Some friendship groups may choose a funeral tribute in letters to spell out their collective nickname for the deceased or a tribute to a football club. Letter tributes are made up with flowers in oasis on a moulded template. Funeral flower letter sizes are around 30cm and are always uppercase letters. Funeral letter costs vary depending on the length of the word and the flowers you choose to make up the tribute.

There are 2 main styles when choosing a letter tribute. One is a massed arrangement in a solid base colour with the most popular choice being white. The tribute would be edged in ribbon in the colour of your choice and a separate spray or mount on one letter or letters of your choice. The most popular option being the first letter of the word.The other option would be letters a loose style also known as open letter tributes.The nature of the tribute and the work it involves means that the florist will need at least 2 working days notice in order to ensure they have time to order whatever flower varieties you choose. As a customer you may want to also consider the impact of seasonal demand when choosing flowers to ensure adequate time is allowed. For clarity, if the funeral falls around mid February there may be a higher than normal demand on flowers especially if you are looking for funeral flowers in red. Other adornments can be attached to letter tributes such as a sprig of heather or thistle as an extra touch of personalisation on the tribute. Numbers can also be used in funeral tributes but are less common, symbols such as floral love hearts are also available to order. Customers who order funeral letter tributes may also choose funeral flower posies, wreaths or funeral pillows and cushions

Ordering funeral letters near you

When ordering your funeral letter flowers through Direct2florist you can be sure that the flower order will receive first class service from one of our talented high street florists. Florists for whom first class service is the norm and assurance that a high class flower arrangement will be handmade and hand delivered for your loved one.Their close working relationship with funeral directors will make sure that they know exactly when to order funeral flowers, when to make the tribute and when to deliver to ensure that the tribute or funeral flowers are delivered to the funeral director in optimum condition ready for the day of the funeral.

Q1 How much do funeral letters cost

Florists will generally have a basic price for letters and numbers however this will increase if more expensive flowers are to be used. Letters and numbers are generally done in a base colour and then personalised further by adding mounts or sprays. The cost will of course increase depending on the length of the word being spelled out.

As the main or focal floral tribute to the funeral, letters are usually sent by close family members and placed with the coffin or casket. If the family are in agreement, groups of friends or acquaintances may send letters spelling out a nickname but these would not be the main tribute placed with the coffin.

Are you a florist delivering to this area? Contact Us Today